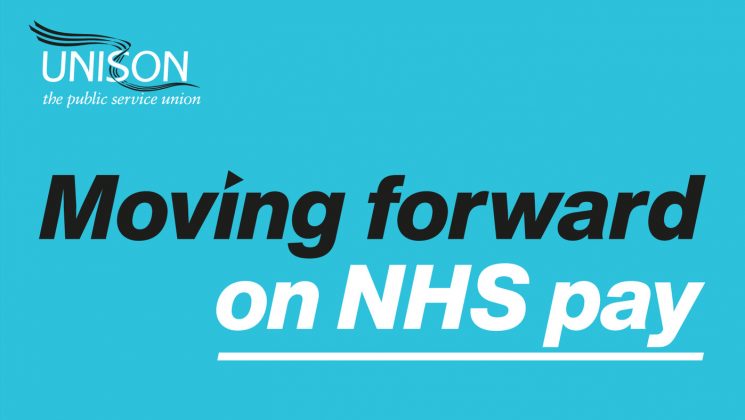 Over the last few months UNISON health branches have been working hard to support your members through  one of  the toughest  times  you have  ever  faced. We know UNISON health branches have gone the extra mile, fielding many enquiries, dealing with issues around PPE, risk assessments and supporting those members who are clinically vulnerable or shielding. You have dealt with  the aftermath of our members contracting COVID 19 or sadly losing their lives.

Branches have adapted to new ways of working and have stepped up to help our members.

UNISON health activists and members have told us of your pride in what you have been doing and how you have appreciated the support you have been shown by the public over recent months. UNISON believes that the public now expects their gratitude to be reflected in what the government does next for NHS staff.

Launching our call for early talks on pay

The Blueprint for Return was issued by the joint NHS trade unions in May 2020 and outlined our expectation that the government make a clear statement of intent that the contribution of all NHS staff, whatever their jobs, in dealing with this pandemic will be reflected in future conversations about pay.

As the pandemic took hold, there were a number of calls for short-term Covid bonuses for certain groups of staff. The Health SGE discussed this and concluded this approach would be divisive and tokenistic and a non-consolidated bonus could let the government off the hook cheaply. And with talk that a 2-year public sector pay freeze was under consideration, the SGE felt there was no time to waste and the best and most sustainable approach was to go for early settlement of the 2021 pay round. After discussion of what a pay claim could look like, the SGE decided to test £2000 on all pay points as a substantial but credible amount that would be clear and simple to campaign for, reflect One team values, and get well clear of a £10 per hour minimum rate.

Tens of thousands of members responded to our survey, and nearly 9 out of 10 of them supported a campaign for an early NHS pay rise. There was also strong support for the idea of a £2000 pay claim.

At the same time, we discussed these positions with the other 13 NHS staff side unions who were all very supportive of seeking early settlement and were starting to consider their own views on what a pay claim should contain.

Against the backdrop of the NHS 72nd birthday, the final clap for carers and the upcoming coronavirus budget the health service group executive made the decision to move quickly. On the 3rd July, alongside the 13 other staff side NHS unions, we launched our Moving Forward on NHS Pay campa ign. The joint NHS unions wrote to the prime minister to ask for pay talks to be moved forward. You can read our press release and the letter to the PM and the chance llor , and letters were also sent to the relevant ministers or secretaries in Northern Ireland, Scotland, and Wales. We also wrote to all our members in the NHS.

We are asking the Prime Minister and the Chancellor to commit to pay talks and  an early pay settlement. We have asked  the government  to  show their  support for healthcare staff by:

show staff how much they are valued – warm words are not enough.

Get your branch ready for the pay campaign.

The call for early pay talks to the PM was the first step in our campaign. In our recent survey, members showed strong support for a £2000 pay claim and we  will take this into our ongoing discussions with the other 13 NHS trade unions about reaching a joint pay claim in the next few weeks. The Health SGE will continue to oversee this work, and a pay claim will be published once these discussions reach a conclusion.

This campaign begins in very different circumstances than we have been used to. Branch officers, reps or UNISON organising staff may not have easy access to notice boards or canteens. Sharing of campaign materials and the distribution of leaflets may be challenging and we appreciate that your branch capacity might be limited right now. However, we know there is a real appetite for this campaign so now is the time for your branch to begin to prepare itself for the next stages.

We will report back you on our progress and when we are ready to launch the pay claim, we will come back to you with some specific campaign actions.

You can get your branch ready for the pay campaign by:

We use cookies on our website to ensure you find the information you need in the simplest way. By continuing to use our website you are consenting to their use. Find out more about cookies and how we use them.